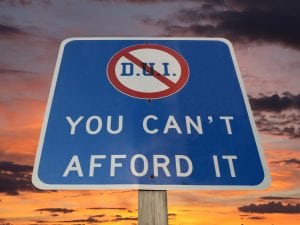 In New Hampshire, you can be arrested for a DUI if you have a blood Alcohol Level of .08% or higher for anyone at the of 21 or older.

Many drivers will ask how many drinks it takes before you will be considered “legally drunk?” It is possible to find charts out there that will outline how many drinks you can have, but everybody handles alcohol differently. In most states, even if you have not reached the .08 level, you can still be arrested for a DUI if the officer believes you are impaired. The best answer is to never drink and drive.

Some of the offenses that can come along with getting a DUI are; the first offense will consist of a 180-day license suspension, a $500-$1,200 fine but no jail time. The second offense will be a 3-year minimum license suspension, 30 days’ minimum in jail, a minimum of a $750 fine, and a possible Ignition Interlock Device requirement. In order to get your license back after the suspension, you will have to attend and complete a 7-day course designed for DUI multiple offenders. This course will be done at your own expense. The third offense is indefinitely getting your license suspended and it will not be restored for a minimum of 5 years, a minimum of a $750 fine, and a minimum of 180 days in jail. Along with any of these offenses, the court may have you submit random urinalysis and any other tests the court may deem necessary.

New Hampshire law does require an individual who has been arrested for a DUI to take a breath or blood test. New Hampshire considers this to be “implied consent.” This means that if an officer has probable cause to believe that you have been operating a motor vehicle, or operating a boat while you are intoxicated, you consent to taking a chemical test of your blood, breath, or urine to determine your blood alcohol content at the time of your arrest. New Hampshire’s implied consent law spreads even further to not only at the time of an arrest but even if you have not been arrested. This is considered a preliminary breath test. You can refuse to take this test, however, ultimately this would not work out in your best interests. The officer has the potential to establish probable cause beyond having the preliminary breath test allowing the officer to still arrest you.

If you refuse to take the breathalyzer test, the consequences for a first offense is a 180-day license suspension. The second offense is a 2-year license suspension. Once you have been arrested, it is the officer’s duty to inform you of the consequences for refusing to take the test. It is important to note that if you refuse the preliminary test and are then arrested and refuse to take the test again, both refusals count as only one because you are given the right to refuse the preliminary test without receiving any penalty.

In many cases, it may be beneficial for you to take the chemical tests instead of refusing. By refusing the test, an attorney could argue that you refused to take the test because you knew you were impaired and guilty of a DUI. In these instances, agreeing to take the tests may help your case down the road.  As always, the best way to avoid these situations is to never drink and drive.

Who is at Fault in a Distracted Walking Accident?
Scroll to top